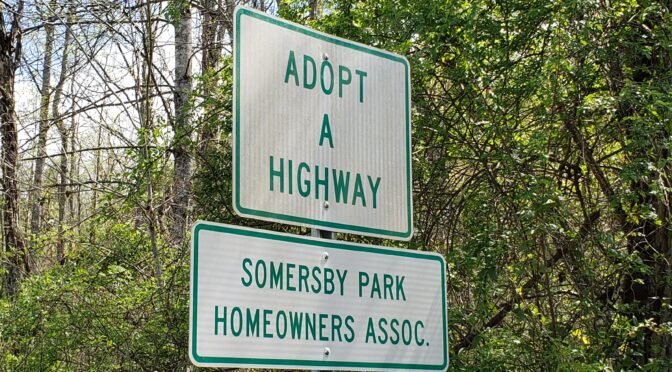 A dozen neighbors gave up an April Saturday morning to help clean up the public road leading to Somersby Park. For years now, residents have gathered regularly as volunteers to help the North Carolina Department of Transportation’s “Adopt-A-Highway” program. Such outreach brings neighbors together in this win-win activity. 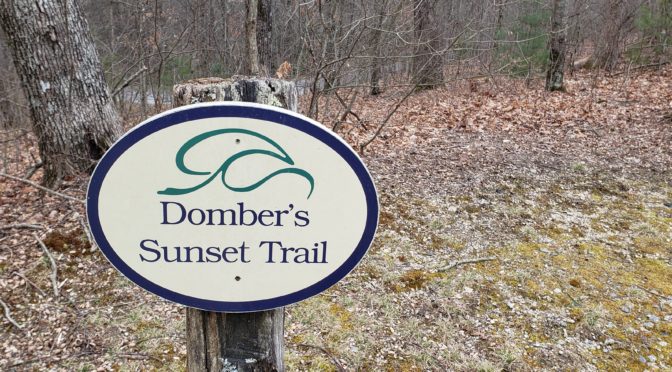 Somersby Park offers natural amenities like walking trails. There are several maintained paths throughout the private community and enjoyed by residents.

The names are interesting and the following is the history behind each one.

Bonehead Ascension Trail – from Chris – I affectionately call my grandchildren Bonehead at times, & one of my grandchildren, Clarklyn, used to visit us frequently & walk the trails with me.  She even helped me clean up one of the trails.  That particular trail is not very long, but it ends up with a pretty steep climb to the top.  The name Bonehead Ascension was my way to remember her & our times of walking those trails.

Bacchus Run Trail – from John – Early on when I was a homeowner at Somersby I became involved with the American Cancer Society’s Relay For Life of Henderson County.  I asked the neighbors if they would be wiling to form a  team.  Many agreed.  We arranged a dinner through Scott at First Street Wood Fired Pizza.  It was held on a Monday night when the restaurant was normally closed.  Scott didn’t charge us for the space.  Most if not all of the members of the team served and bused the tables.  We charged for the dinner and had both a live auction and a silent auction.  We did this for about 3 years, maybe 4.  I think in our best year we raised about $7K+. Now to the trails.  I was looking for an additional way to raise money.  I realized that the trails had no names.  After receiving permission from the developer and the team we agreed to auction off naming the trails.  My dog Bacchus and I walked the trails often.  I was high bid and named one after my dog, Bacchus.  Chris named one and Tom another.  It turned out to be a good additional fund raiser. You could consider asking those who have named the trails, like myself, if they would mind if you auctioned off the names of the trails again, to raise additional money for BBBS.  I certainly would agree.  Just a thought.

Tom’s Trail – from Tom – You may be thinking that Tom’s Trail has some connection to me. The Greens (may they rest in peace) named that trail in honor of a good friend who had died.

Domber’s Sunset Trail – from Kristen and John – When surveying Somersby Park for their future home, they noticed the beautiful sunset across from their lot. They participated in the auctioning of names and came up with Domber which is a combination of Kristen’s maiden last name and now both John and Kristen’s married last names.

Dee’s Memorial Trail – from Virginia – When resident Dee lost her life, two fellow residents stepped forth to remember her. Virginia and Brenda made donations to name the trail for their friend and neighbor.

Kangaroo Falls Trail – Joey is the name of a baby kangaroo, so how appropriate to declare the trail and falls after Gary’s oldest grandson Joey. An added bonus, the iron enriched springs have colored the waterfall rocks orange, similar to that of a kangaroo. 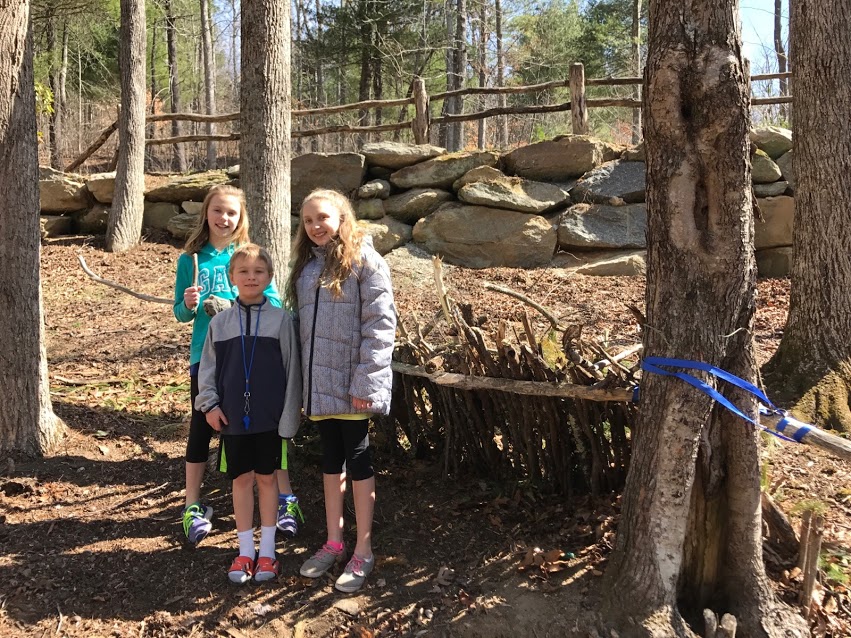 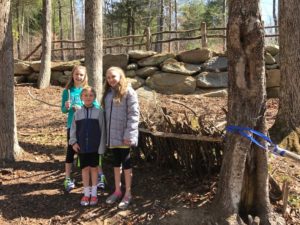 One of our families children came up with a bright idea and project.

We decided to build a lean-to in order to provide a shelter for all the animals in Somersby Park.

We first learned about how to build a lean-to in our outdoor education at school.

If you are in the woods and need shelter, you can gather sticks, leaves, and pine needles and make a quick shelter to get out of the elements.

Because the animals can’t really make a shelter, we decided to make one for them.

We even put some seeds in the shelter to attract animals to come into the shelter.

We have seen mostly squirrels in our lean-to, but it is big enough for wild turkey and deer to use as well. 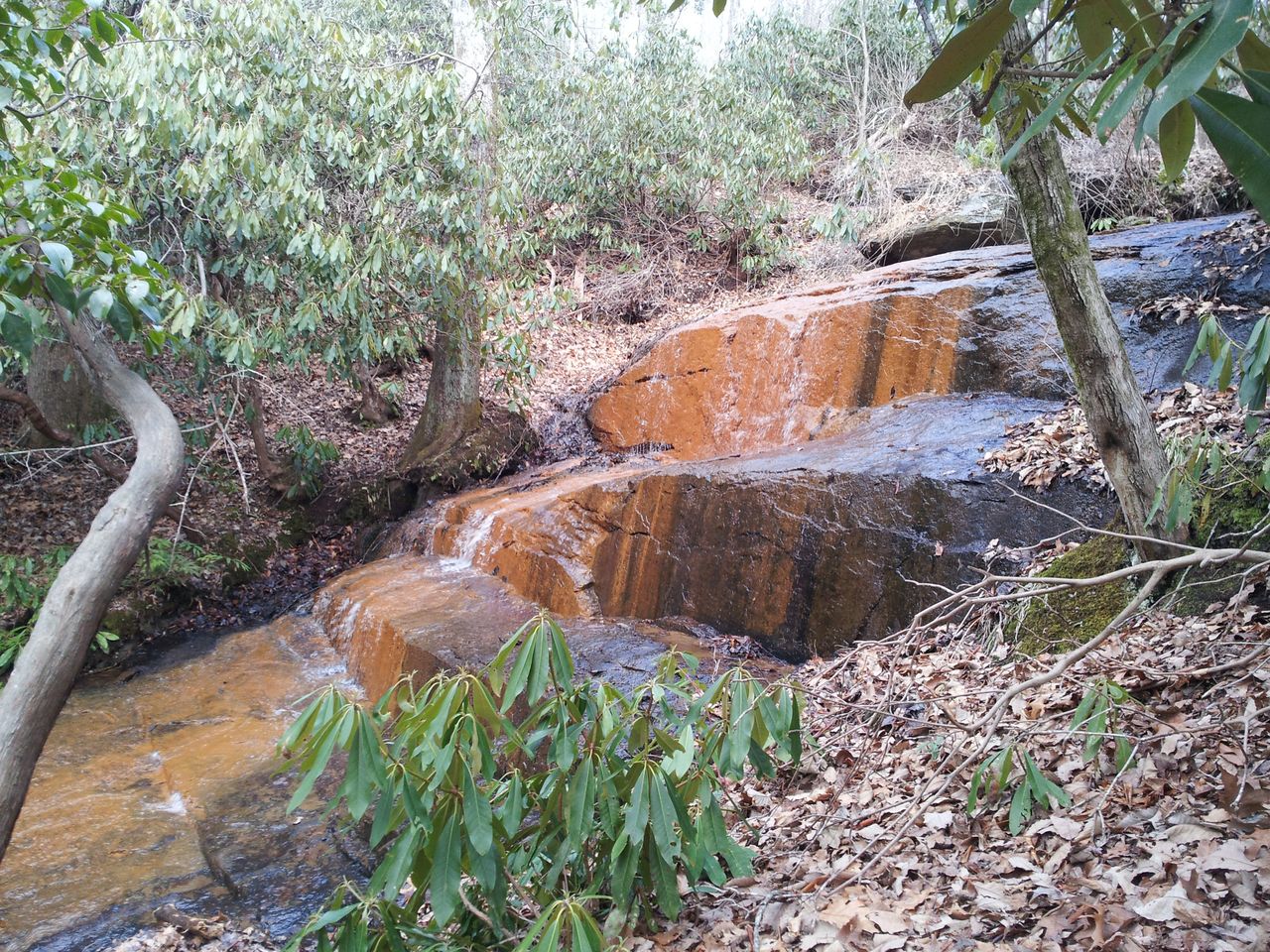 Thanks to our resident volunteers, Somersby Park has new bridges on our trails… one across Kangaroo Falls and two can be hiked along the creek on Dee’s Memorial Trail. Enjoy! 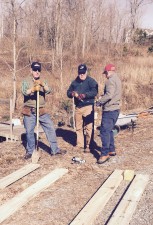 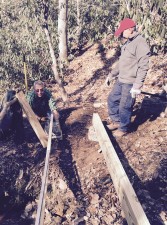 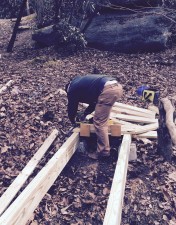 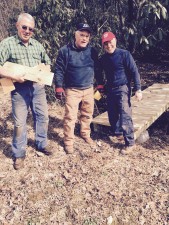 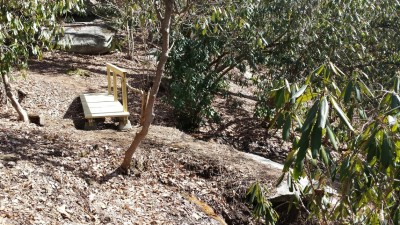 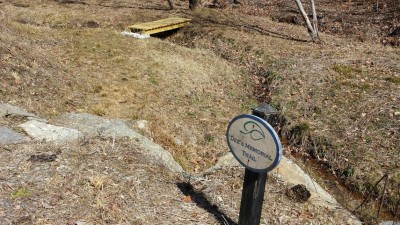 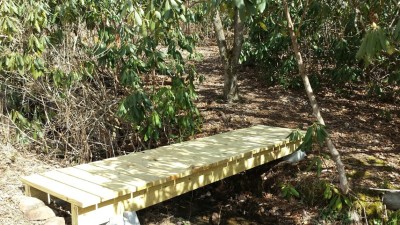 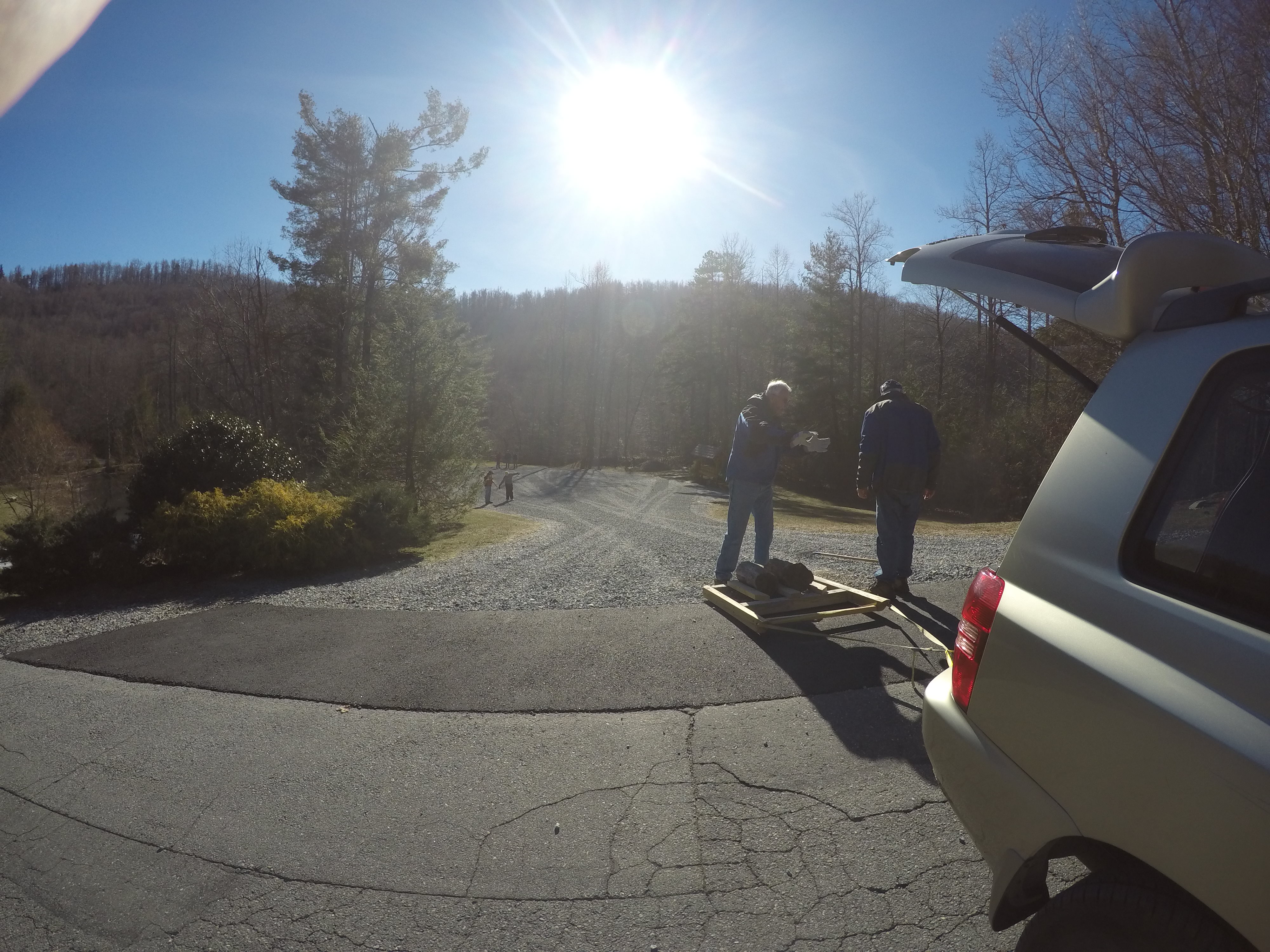 In mid-January 2015, Somersby Park home and property owners gathered to level out the lower gravel lot. It was another successful volunteer project with good fellowship, exercise and fun. 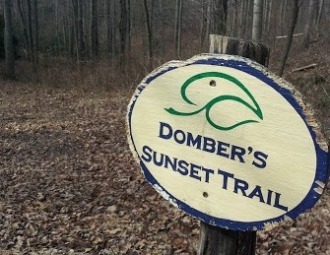 Residential volunteers are the first to roll up their sleeves to enhance our community. 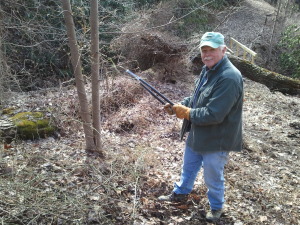 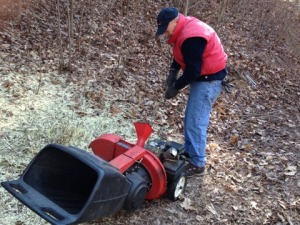 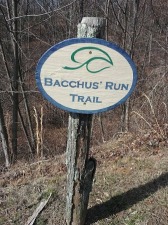 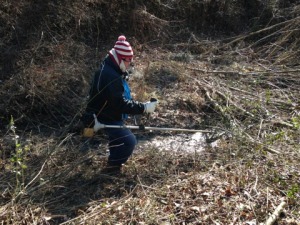 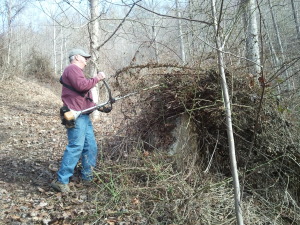 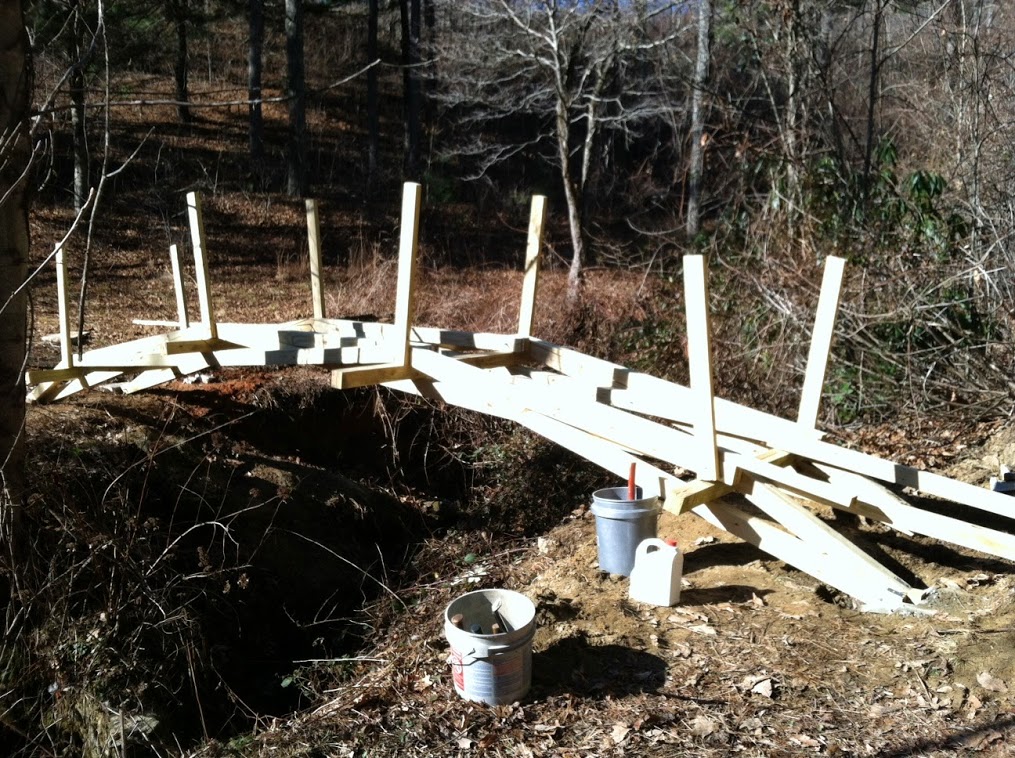